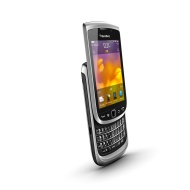 The Blackberry Torch is back, and this time it's got a faster processor and better screen.

The real downside to the Torch 9810 is the already-outdated BlackBerry OS 7, and the near-complete lack of quality apps available through App World.

Casual BlackBerry users will likely find the Torch 9810 pleasantly fast, quirky and a little bit charming. Those who love physical keyboards will adore that of the 9810 – but it’s not any better than the keyboards on other BlackBerry handsets. The...

A fresh dose of oxygen or a new torchbearer? It doesn't matter which one you think RIM needed to keep the flame alive. They got both in the new BlackBerry Torch 9810. Double the processing power, the new sped-up and brushed-up BlackBerry OS 7 and...

BlackBerry Internet Service account is a must to enjoy all phone features ; No Flash support for the web browser ; No NFC ; No video-call camera ; No FM radio ; No haptic feedback ; All-plastic body ; Poor loudspeaker performance

The BlackBerry Torch 9810 for AT&T is a very solid messaging phone, but the app revolution seems to have passed it by.

The Torch 9810 isn't 4G. It runs at HSPA+ 14.4 speeds on AT&T's network and when roaming abroad. Thanks to RIM's server-side compression, though, email and social-networking messages transmit extremely quickly. The phone has a Wi-Fi hotspot mode that...

For those who haven't followed my smartphone history (and I suspect many haven't), last December I gave up my BlackBerry Curve 8530 for an Android phone. It's true, I was long a BlackBerry (and...

Neither the new Torch nor Bold provide what it takes to reel back in an Android convert. I’ve seen the other side — the beauty of a large app catalog, an OS that is modern to the core

The BlackBerry Torch 9810 improves on where the original Torch left off, but in specs it remains far behind the competition.

AT&T seems to know this, by the way. $49.99 is an absolutely killer price for a smartphone with these specs. But I won't let the low price sway my review.

The BlackBerry Torch 9810 for AT&T is a very solid messaging phone, but the app revolution seems to have passed it by.

There are now two BlackBerry Torch models in RIM's armoury: the 9810 we're reviewing here and the 9860 that we've previously reviewed. The 9810 is a slider phone packing a full QWERTY keyboard essentially the same design as the phone it replaces, the...

The BlackBerry Torch 9810 feels like an incremental step for RIM. The previous handset had obvious problems, some of which are addressed here, but we also feel that the 9810 is the phone the 9800 should have been. That sets this handset behind the...

The original BlackBerry Torch was a decent QWERTY/Touch experiment from RIM, but fell short in the processor and operating system department. Now BlackBerry

No Flash internet ; Video is fiddly to turn the light on ; Poor music loudspeaker compared to Bold 9900 ; Not much difference to Torch 9800 ; No NFC and only 5MP camera mean it's not massively future-proof

This time last year, BlackBerry fans were salivating at the imminent release of the Torch 9800.